If not an outright monopoly of labor, unions are at least a form of imperfect competition in the labor market. Theories of tax incidences are much more varied are hard to generalize as competition diminishes. Consider a monopolist with a linear demand curve, then the monopolist will bear 1/2 the economic incidence.(a) However, the monopolist will be able to overshift onto output consumers if the demand curve lends itself to optimal mark-up rules, as in the case of a constant elasticity demand function.(b) In an oligopoly market, there is no widely accepted theory of firm behavior and therefore no generalizations of what tax incidence may be (see Stiglitz & Rosengard, Economics of the Public Sector 4th edition, p. 556).

One of the interesting areas of research in recent years has been on the labor incidence of the corporate income tax, and generally it seems unions bear a substantive portion of the tax’s burden. In this NBER Paper by Felix and Hines (“Corporate Taxes and Union Wages in the United States”, 2009) find that unions capture about half of the gains of reductions in state corporate income taxes. Similarly, a recent American Economic Review article by Fuest, Peichl, and Siegloch uses a rich employer-employee linked administrative dataset from Germany and finds worker wages absorb about half the burden of the corporate income tax, but that there is considerable heterogeneity across a whole variety of wage-setting institutions in the country. The findings are difficult to summarize, but they helpfully provide this Table where their last column summarizes their corresponding empirical findings: 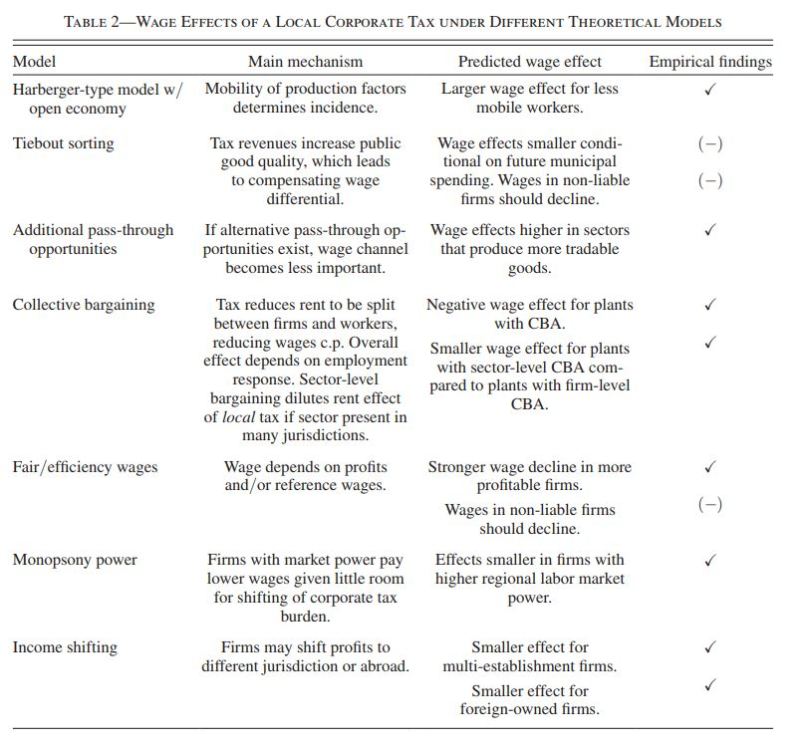 (a) This one-half result falls out of the linear demand function of the form p=A-bq yields a total revenue function of p*q=Aq-bq^2. Taking the derivative yields a marginal revenue curve of MR=A-2q.

(b) In a CES demand function, the optimal mark-up rule yields p=[(e)/(e-1)]*MC, where e is the price elasticity of demand in absolute value. The function is defined when e>1, so if e=2 then price is double marginal cost [2/(2-1)=2]. Adding a tax to marginal cost would cause the change in price to be a multiplier increase based on that mark-up, resulting in overshifting.