Last Thursday, John Mikesell passed away after a prolonged bout with cancer, about which I will just say that he was characteristically stubborn to the end.

As a walking encyclopedia of tax policy, John was a giant in public finance, collecting lifetime achievement awards from the National Tax Association and the Association for Budgeting and Financial Management. He was longtime editor of Public Budgeting and Finance, and served in numerous practitioner positions in service to the public. John was a Bloomington-born Indiana native, so he was particularly touched to receive the Sagamore of the Wabash award from the governor in recognition of his years of service in advising the legislature on public revenue forecasts and all manner of tax policy subjects.

If you’d like to walk through a “vintage Mikesell” article, you would do well with this working paper from last year on Retail Sales Taxation in the New Economy. He had a knack for exploring a topic in a way that cut directly to the questions policy makers were asking.  However, John was famous for his footnotes. I still read his papers all footnotes first, and if you follow in suit you’ll be rewarded with interesting anecdotes, historical details, and amusing jabs at legislators. My favorite “Mikesellian Footnote” is the first in a paper summarizing state programs that granted amnesty to self-reporting tax delinquents:

The first tax amnesty on record was reported on the Rosetta stone, an amnesty declared by Ptolemy V Epiphanes in Egypt, circa 200 BC. The stone itself expressed the appreciation of the priesthood for the program. It is not clear whether any state amnesties were based on this experience.

It is difficult to unite his work as he published on virtually every subject in public finance, but I will try to do so briefly. In my estimation, John was a very Schumpeterian scholar. Joseph Schumpeter is best known for his characterizing of capitalism as “creative destruction,” but what brings him and John together was their mode of inquiry in studying both history and how organizations really worked at a practical level. Schumpeter, for instance, required all of his econ PhD students to take accounting, rationalizing that anyone who didn’t understand t-accounts wouldn’t understand business production choices. John likewise approached subjects this way but to greater lengths. For John, to study something like sales taxes in the American states meant he studied how states taxed sales and he would start at the cash register. He would learn how everyone from the cashier, to the tax accountant, to the tax lawyer writing the legislation would have to do their job. Ideally, he would try to figure out how everyone’s jobs evolved over time. How did resource-constrained state tax collector’s enforce the use tax during the Great Depression? Pull over and search moving vans!

This approach began in his earliest work with his Masters thesis under John Due who, in addition to his father (also an IU public finance scholar), was an important professional role model for him. With admiration John said that Due in his sixties would arrive early in the morning so excited to get back to his work that he would run down the hallway when he’d reach his floor. John likewise loved his work and only sped up his research program in his retirement.

Not only did I never hear John once complain of his students or his teaching, he described it as his main reason for continuing his university employment. Research was fun, and service was a tolerable exchange for the gifts of teaching. His only reason for retiring was that he could not trust his health well enough to commit to teaching for a full semester. He liked writing exam questions, preparing notes, pulling examples from the news, etc. He thought serving as a member of the Indiana Revenue Technical Forecast Committee made him a better teacher even after many decades of service, so he stuck with that to the very end as well. He was proud of his students, and had a way of charming them with a gruff demeanor.

Speaking of demeanor, I think everyone who encountered John would come away with a story of him. For some he was an acquired taste and this was not hard to understand. A friendly colleague once remarked that he had the perfect mustache for his personality, an observation John would find amusing because this was not entirely unintentional. While he was outwardly very witty, I hope this anecdote conveys his subtle humor-behind-the-stern style that students would learn to love over a 16 week semester after perhaps fearing it in week 1. It has been my fortune to have had eleven years. 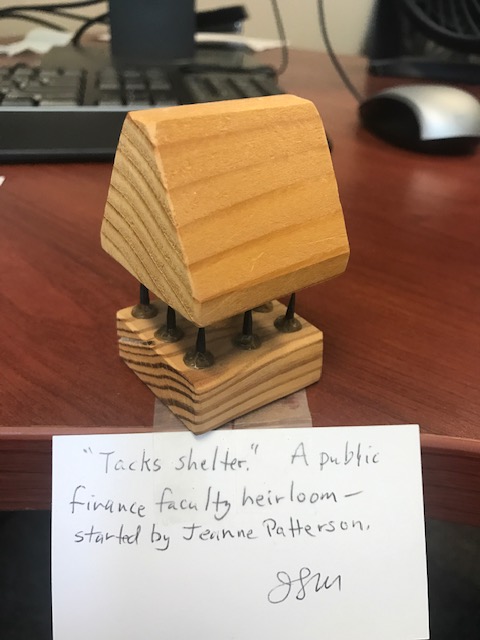