New in Public Choice by Niclas Berggren and Christian Bjørnskov is evidence that more regulation in the market economy results in higher levels of public debt.

Government debt is large in most developed countries, and while budget deficits may reflect short-term attempts to kick-start the economy in times of crisis by means of fiscal stimulus, the longer-term consequences may be detrimental to investment and growth. Those negative consequences make it important to identify factors that are associated with public debt. While previous studies have related government debt to economic and political variables, they have not incorporated the degree to which the economy is regulated. Using a measure of regulatory freedom (absence of detailed regulation of labor, business and credit) from the Economic Freedom of the World index, we conduct an empirical analysis covering up to 67 countries during the period 1975–2010. The main finding is that regulatory freedom, especially with respect to credit availability, reduces debt accumulation. The effect is more pronounced when the political system is fractionalized and characterized by strong veto players, indicating policy stability and credibility, and when governments have right-wing ideologies.

This wasn’t very intuitive to me, so I’ll unpack the authors arguments a little bit here. By “debt accumulation,” the authors mean public debt as a percent of GDP (as opposed to per capita debt or total debt). I’m not crazy about that, as regulation plausibly affects GDP, but I’m not sure what a better way to scale it would be. Here is a preview of the theoretical explanation:

We propose that the extent to which an economy is regulated matters, on the basis of four theoretical links. The first is that people who hold pro-market attitudes tend to be opposed to public regulation of the private sector and hold skeptical views about substantial government debt. The second and third are that regulation affects the functioning of the economy in ways that influence debt, and that regulation may serve as a signal to lenders regarding contemporaneous or future problems in the economy or the government, such that they set interest rates (that influence debt levels) accordingly. Finally, a regulated economy may be comparatively inflexible and unable to adjust very well to changing macroeconomic circumstances, which could leave the government with incurring debt to counteract downturns as its only politically viable option.

The first link is probably true, but isn’t all that interesting as it is arguing that regulation is correlated with an omitted preference for government rather than being a causal factor in its own right. The other links are indirect in the sense that the regulation causes something else to happen and that something else also affects debt. This is usually the stuff that leads to structural modeling but that is not where this paper is going.

The last theoretical link is the most interesting I think, where the supply of regulation creates demand for additional government spending during recessions. My first thought was that more volatile economies (induced by regulation or not) should plausibly have governments more engaged with countercyclical policies that enable consumption smoothing. That should plausibly cause more short-term debt during downturns, but also greater rainy day fund balances (albeit it is not empirically obvious in looking at the American states).  However, the authors proposed mechanism for this link is a kind of political commitment where heavy regulation means the government is now more responsible for a well-functioning economy. Kind of a “you break it you bought it” style of commitment.  I’m not sure I believe that specific mechanism, but it does make some intuitive sense to me that a more regulated private economy that restricts access to private credit or slows down private capital reallocation will increase the government’s comparative advantage in borrowing over private citizens. That is, the larger the Okun Gap, the greater the gap in borrowing costs between the private and public sectors that might plausibly favor government-over-private borrowing.

The regression results hold up the association (see the last variable, “Regulatory freedom”) that less regulation implies less public debt, though the point estimate will halve or double as you start adding control variables, so we are a long way from a convincing causal estimate. 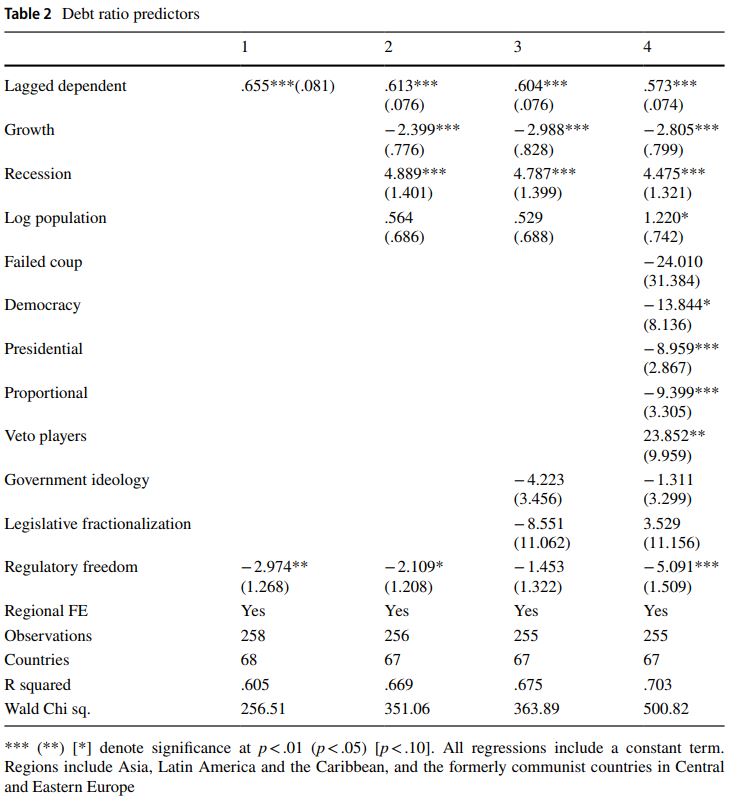 Still, it is an interesting hypothesized mechanism, and it would be interesting to see if it would bear out in a cleverly designed citizen or policy maker experiment of some type.